4 May 2017. Painter Jake Wood Evans is exhibiting at the YMCA HQ in Hove as part of Open House this month, and has also shown at the Pheonix and INK’d galleries in Brighton over recent years. His work is an intriguing blend of traditional and new painting. 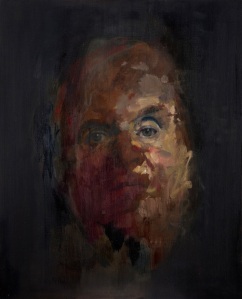 “Wood-Evans evocative works create a crackled tension, of place and unknown space on the canvas, blurring the distinctions between the past and the present. Swiftly, with his Proustian sensibility, Jake Evan-Wood catches the transience of past histories – its glories and frustrations; in his ‘search for lost time’, he reveals time’s depth, unveiling all its sublime pleasures and tainted legacies”. (Rachel Thomas quoted in https://www.jakewoodevans.com/biography) 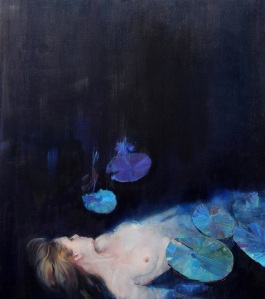 Inspired by some of the finest Baroque artists and their paintings, Jake Wood Evans’ work ranges from small and sensitive studies to large scale, epic canvasses. Creating intangible, dark works he provokes emotions of a both unsettling and beautiful notion and mood. By combing the two worlds of contemporary and classical art, his oil paintings take the viewer into worlds full of imagination and strong allure. (Quote from Ignant blog https://www.ignant.com/2013/09/16/jake-wood-evans/

These works interest me because they combine neo classical painting techniques and form, with ‘contemporary’ or ‘figurative’ styles. They’re basically traditional chiaroscuro oil paintings of figures and faces, but not finished. So you have a perfectly realised eye staring out of a rough painting. The rough bits celebrate all those accidents of preliminary painting, done with a big brush and expressionist or impressionist in effect, as practiced by fine contemporary artists such as Kanevsky, Alejandro Decinti or Jeremy Lipkin. Or, the finished painting is blurred by wiping off, a la Gerhard Richter, who famously said he blurred his paintings (in his early days) because he could not paint. Later, Richter produced perfect oil paintings, of slightly unusual subjects – the back of the head, a candle flame.

Traditional, or high art painting has been discredited since modern art emerged from the romantic movement around 1850. Modernism had toppled the old society dominated by king, church and superstition. Modernism demanded the new,assumed to be better, but also created the modern era of industry and capitalism. The reaction – romanticism – demanded a return to an age of feeling, a connectedness with nature or spirituality.

So, take an old master, mess it around, blurring it and painting rough, bright colours, suggestive of expressionism, or technology, around the central focus, and you have a contemporary figurative painting. It triggers the old emotions, the reverence for the human form, especially the feminine, but it signals awareness for the modern, by messing up the perfection, and layering it with the new, and pointing to a more intuitive, a more ‘feeling’ approach.

It also has the great advantage that the painter can select those bits of expressionist under painting, and those bits of finished representation, that work. As Richter says, treat the painting like a Swiss cheese, overpaint the bad and keep the good bits, whether they be photo-real, or expressionist accidents.